Developer Artplay is teasing a “big announcement” in 2023 for Bloodstained: Ritual of the Night.

Bloodstained: Ritual of the Night will get a “big announcement” in 2023

Big things seem to be happening for metroidvania platformer Bloodstained: Ritual of the Night in the new year, as developer Artplay and director Koji Igarashi tease a major announcement. ROTN dubbed the spiritual successor to the Castlevania series, was first released in 2019 and has since had a few updates including a crossover for Journey. The tease was shared in the latest issue of Famitsu (translated by Gematsu) which shared the creators’ updates and ambitions for developer Artplay.

We are still working on the content for Bloodstained: Ritual of the Nightbut we strive every day to be able to make a big announcement in 2023.

I would like to finish working on the remaining content for Bloodstained: Ritual of the Night. And that will take us to the next step.

A big announcement could be the release date of the sequel

As for what this major update will be, it is still unknown. Bloodstained has had collab content and even added more characters to play since launch. This could mean new DLC or even more news about the sequel which has been in the early stages of development since last year. An update on its progress or release date could be next.

When BoTN was first released, it received negative feedback for the crowd-funded game, due to a number of bugs and issues with the Switch version. Artplay has been working on a number of updates since, including releasing new content such as new playable characters such as Zangetsu and Bloodless, as well as adding Classic Mode and more. The game has also launched on new iOS and Android platforms. There could be more crossovers going on, which has been popular for inviting indie titles into the mix. 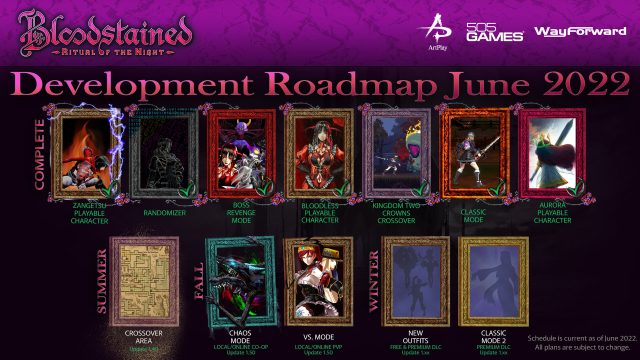 Igarashi previously worked on the Castlevania franchise, but has since released his own title “Igavania”. Castlevania has seen other forms of interpretations with the Netflix series which ended with its final season in 2021. But just recently at The Game Awards it was announced that it will also appear in the indie title Dead Cells, which has been on a roll lately with collaboration content. The “Return to Castlevania” previewed classic Castlevania characters entering the realm of The Beheaded with new weapons, characters, and biomes in the 2023 DLC. This could mean something similar for ROTN, adding an expansion important to the game before the release of the sequel.

If you haven’t purchased the game yet, you can pick it up through January 5 as part of the Steam Winter Sale for up to 65% off. Be sure to head over to our Bloodstained Ritual of the Night wiki for all the latest information.

For more news, find it here in Capcom The director assures fans that the Dragon’s Dogma 2 update is coming soon and Afterimage The Hand-Drawn Metroidvania gets a release date.

Elder Scrolls 6 Release Date May Be With The UK Government, But That’s Not Revealing